Microsoft famously claimed that the Surface Pro was a “no-compromise” device—the best of both a tablet and laptop. John Gruber of Daring Fireball famously pointed to reviews calling that claim into question. It was a touchscreen tablet with a full laptop keyboard.

So it was not surprising that reviewers and people on Twitter complained bitterly about the iPad Pro’s Smart Keyboard, and how un-laptop-like it was.

So I did a little research, and in this post I’ll explain my thoughts with photos to back them up.

If you think about it, there’s no such thing as a no-compromise device. Everything in life is a compromise. Everything.

You want a fast, gas-powered car? Get a European sports car.

You want great gas mileage? Get an economy car.

You want both? Compromise on an Audi A3 or A4 with a turbo 4-cylinder.

But you simply can’t get an 8-cylinder car with 400 hp that gets 35 MPG. You have to compromise. This is what life is all about.

What’s so difficult in product design—and what Apple so often gets right—is knowing which compromises to make. You need to have clear product goals in mind, and understand product differentiation, and the role of different product lines, such as iPad versus MacBook.

Sure, you can slap a notebook-like keyboard on a tablet and then you’ve got a great keyboard. But what compromises to the touch experience does this entail?

What’s so difficult in product design—and what Apple so often gets right—is knowing which compromises to make.

I posted the other day about how the iPad Pro is primarily a touch-based device. That is to distinguish it from a very similar device, the new Retina MacBook, shown below, that is primarily a keyboard-driven device. Similar devices, similar battery life, similar screen sizes, similar weight & thickness. But each has its own compromises. 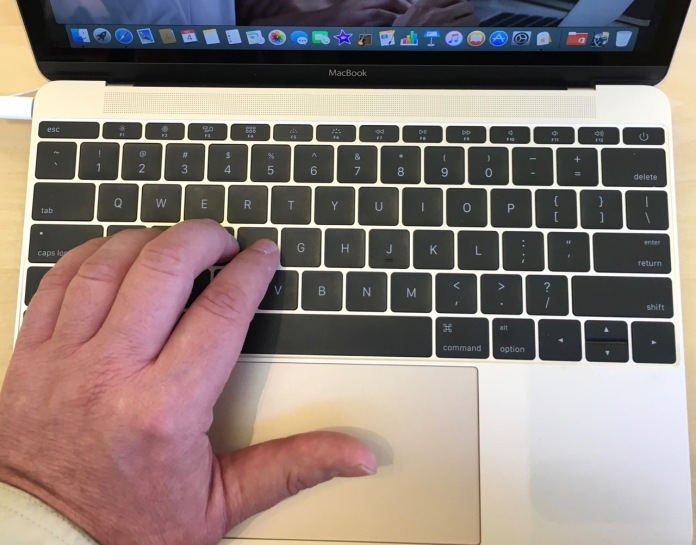 How does one do that? Well, think about the iPad Air. That has an onscreen keyboard. They keys are full-size, but it doesn’t have every key from a PC keyboard on the main keyboard because there’s not enough room. So you can touch buttons on the keyboard to switch between different groups of keys–or press and hold to see alternate keys. This also results in keys being in different places on an iPad Air’s onscreen keyboard compared to a PC’s keyboard.

If the iPad Air already has all the keys on the onscreen keyboard, why bother making a physical keyboard at all?

So if the iPad Air already has all the keys, why bother making a physical keyboard at all? That is the key question that a keyboard cover for a tablet must answer. And Apple’s answer is:

Yes, it’s that simple. The goal is to make touch typing as fast and easy as on a PC (by PC I mean any laptop or desktop device with a physical keyboard).

Well, you say, just slap on a PC keyboard, since that’s what everyone’s used to for touch typing. Yes and no. Remember that touchscreen experience that we’re trying to preserve? We need to keep that in mind.

Why? Because the more keys you put on a keyboard, the further your hands are from the screen.

The more keys you put on a keyboard, the further your hands are from the screen

So let’s go back to touch typing. What’s the minimum set of keys you can put on a keyboard and still retain touch typing? Well, the alphabet, obviously. And numbers. And punctuation. And command/shift/delete/option/control keys, for shortcuts. People touch type those keys all the time.

It’s all about compromise. “Hey, don’t give me all they keys–give me the most often typed keys on a tablet’s keyboard”.

Remember, most of the function keys’ functions can be accessed by swiping up from the bottom of the screen to get to the Control Center—again, iPad Pro is primarily a touch-screen device.

So how did Apple solve this conundrum? They removed the top row of function keys, making the rest of the keys—and thus your fingers—as close as possible to the screen. In the image below, you can see how, with my fingers on the home row (A/S/D/F keys) of the keyboard, I can still reach the iPad Pro’s screen without moving my palms–just by extending my fingers. Those handy autocorrect options as well as Text Alignment, Font, etc. are right within reach, as is Control Center.

With my fingers on the home row (A/S/D/F keys) of the keyboard, I can still reach the iPad Pro’s screen without moving my palms

That was my theory. But my Smart Keyboard has been Preparing for Shipment for almost a week, so I can’t test it on my own device. So I went to the local Apple Store and a Best Buy, and compared an iPad Pro to a Retina MacBook, Surface Pro 4, Surface Book, and 3rd party tablet keyboards.

The photos below show my results, and pretty much prove my hypothesis: The iPad Pro’s Smart Keyboard is a beautiful compromise, allowing for touch-typing the most frequently typed keys while also primarily being a touchscreen device.

Here’s a Retina MacBook, below. Almost as light and thin as an iPad Pro, but it doesn’t have a touchscreen, so no compromise is needed for its keyboard (and there’s no Control Center in OS X because you have the function keys right there on the top row). You also get the speakers above them, which are placed differently on an iPad Pro. 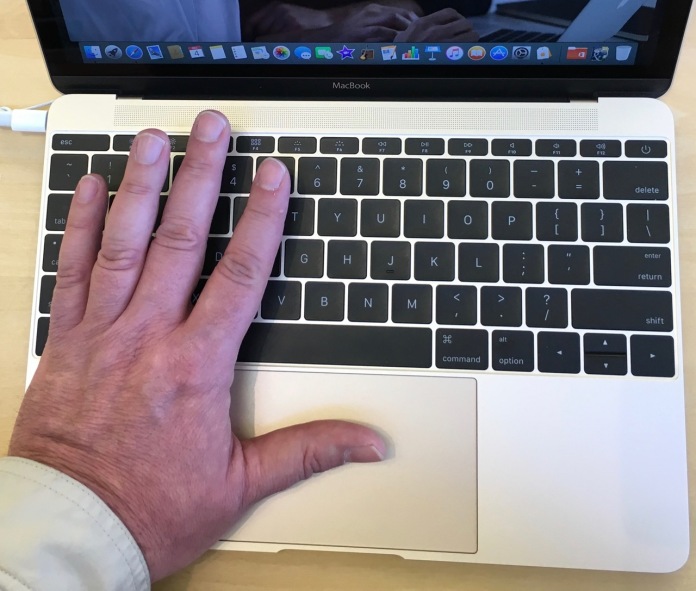 Here’s the Surface Pro, in photos below. It does have function keys, but then look how far your fingers are from the touchscreen. And I also noticed how there is a little valley between the keyboard and screen, so it’s annoying trying to touch the bottom of the screen.

And as for the Surface Book? Well, the photos below show that it’s pretty much impossible to touch the screen just by extending your hands from the home row:

So, the next time you’re ready to complain about the lack of function keys on an iPad Pro Smart Keyboard, ask yourself this: Which is more appropriate for your specific use case–are you looking for a touchscreen device that allows you to touch-type once in a while (iPad Pro), or are you primarily a typer who needs a laptop (Retina MacBook)?

The iPad Pro’s Smart Keyboard is a beautiful compromise, allowing for touch-typing the most frequently typed keys while also primarily being a touchscreen device.

Sure, the iPad Pro is sexy, but it’s not for everyone. Apple will gladly sell you a Retina MacBook if that’s more appropriate for your needs.

One thought on “Compromise: How Apple designed the best keyboard cover for iPad Pro”