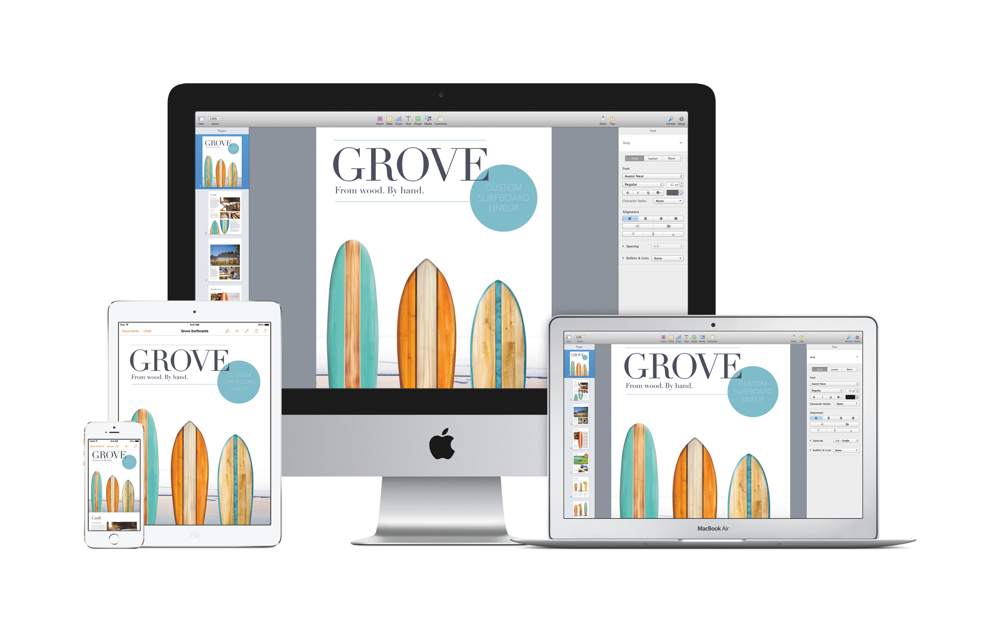 Sure, everyone wants new devices, and new devices are a key part of Apple’s ecology, but devices without software (apps) are meaningless. Take Windows Phone… please.

OK, so some people are talking about OS X Yosemite and iTunes 12 being unveiled tomorrow. Sure, that’s software, but we’ve heard all about Yosemite at WWDC in June, and iTunes will get a new coat of paint but otherwise won’t be significantly different.

Last year at this time, with the introduction of the iPad Air, iPad mini Retina, and OS X Mavericks, Apple did something to iWork that ticked off a lot of its users: they gutted it.

I mean, not without reason.

iWork started on OS X, for Macs. It was a great, inexpensive productivity suite, sort of like a Microsoft Office Lite. Then it was ported to the iPad and iPhone when Apple debuted the iPad in 2010.

But it was sort of a hack. Sure, the iOS version allowed you to do word processing and spreadsheets and create presentations, but the files weren’t exactly compatible with the Mac OS X version of iWork. So you had to sync them through iCloud, with mixed results.

So last year Apple announced that they were starting over with iWork from scratch. They would be using the iOS versions as the starting point, so any features in the OS X version that weren’t in the iOS version would get nixed (for the time being—and you could still use the old versions if you needed those features).

The good thing was that now the files were 100% compatible across OS X and iOS and iCloud.

OK, but what does this have to do with tomorrow’s big Apple announcement?

Apple promised that it would continue to improve iWork over time. In fact, they came out with an update earlier this year that added a number of features back into the software. But since then, it’s been quiet.

Meanwhile, Apple’s been doing a lot of foundational stuff behind the scenes. They added JavaScript app scripting to iOS and OS X. Put 2 and 2 together, and you can see that the new version of iWork may have cross-platform-compatible scripting. (AppleScript is OS X only.)

With 64-bit processors like Apple’s A7 and A8 chips, and great battery life, iWork could be customized with JavaScript (JS) scripts by users or enterprises. Imagine an MDM system that pushes iWork and a bunch of company-specific scripts out to each device in the enterprise.

And what of the iWork.com, which is still in beta? JS scripts would work there, too, since JS is the native language of browsers.

Then there are 2 additional apps that Apple might include in iWork; I wrote about them last year.

First, we have a enterprise note-taking app that Apple purchased in 2012 or 2013. Something akin to Microsoft OneNote. OneNote is the only Microsoft app I use on my iOS devices, but I gotta say it’s very handy. An app like that that synced to iCloud would be a boon to users.

The other app could be a database app. Apple subsidiary FileMaker at one point created a user-friendly database app called Bento. It worked on both OS X and iOS, and synced across devices. But it only synced across 1 Mac and 2 devices—if you had more than that, you were out of luck, and it didn’t store anything in the cloud. And it was discontinued 2 years ago, in the days of iOS 6, so it looks very dated (but still works perfectly).

What if Apple took some of the ideas behind Bento, added an iOS 8-style new look to them, then added JS scripting, iCloud syncing, barcode reading, Bluetooth scanning, Touch ID integration, and maybe even NFC integration? It would be tough to make an easy-to-use app with all those features, but JS scripting could mean the interface is simple but the functionality is highly customizable through scripting. Wow, what a fantastic consumer and enterprise database app for simple data collection that would be (again, potentially with JS scripts deployable via MDM).

Another possibility is the iWork apps could have plug-ins for them using the same extensibility API that the Photos app now uses.

So, do I have any insider information that this is going to happen? No. But it sure makes a lot of sense, seeing what Apple has been developing over the past 2 years.

There are rumors of a 12” iPad Plus coming next year, with a keyboard. Maybe some of these ideas will have to wait until then. But I’m pretty excited to see what Apple unveils tomorrow about iWork for iOS, OS X, and the Web.